This is a native pudding recipe made from carabao’s milk instead of the usual cow’s milk or coconut milk. This sweet dessert originates from Pampangga and it is the counterpart of maja blanca which I think many of us know. The difference of using carabao’s milk instead of cow’s milk is it imparts a slightly salty taste which I think can be remedied by adding a little salt. So why it is called “tibok-tibok”? I think a tale about it is when the pudding is almost done while cooking, the bubbles barely touch the surface which looks like pulsating, like a heartbeat. “Tibok” means heartbeat in Filipino. 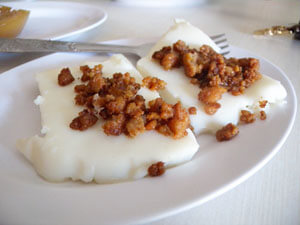 How to make latik :